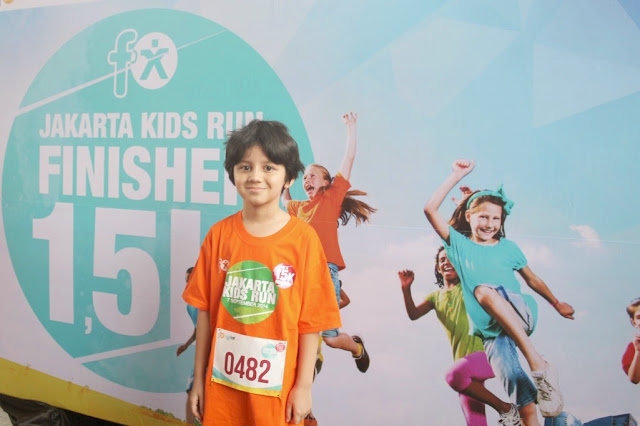 While the first Kids Run was awesome, the second was a little disappointing. We're super excited to know that the registration has opened and signed up right away. The fee had tripled from last year, but we thought it was worth it. The T-shirt has brighter color and the medal is a lot nicer. I picked up the race pack without Andrew and was excited with the fresh orange uniform. It matches Andrew's shoes too.
But the race day wasn't as great as last year, probably due to overwhelming enthusiasm from Jakarta parents. Last year there was limited participation, not so sure about this year. When we arrived at 6.30AM, we can barely walk through the lobby. By 7AM, the event started with a warming up session for all runners. I felt this was a mess as well. The worst part was somehow the over-enthusiastic parents who couldn't stop taking pictures on the start line. We were done by 8-ish but it was still chaotic. I wasn't sure what happened next, between the end of the race and the winners' announcement because I went in the mall and looked for some open space. 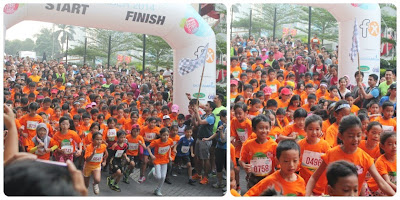 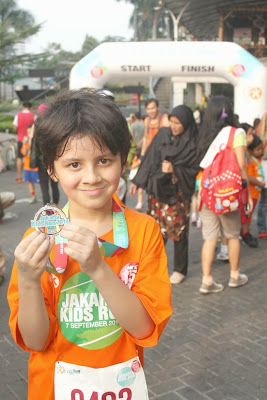 It was still a great race, Andrew enjoyed it the whole time. He took time to run, picking up falling flowers and dry leaves alone the track. He was so excited with the medal too, and didn't care about pushing through the crowd of finishers' parents trying to claim their children's medal. The crew was great and strict about parents turning paparazzi around the race time (haha).

Andrew says "Let's do this again, Mom. This is fun! I'm glad they start at the bottom instead of the upper lobby because then babies wouldn't fall off."

Let's hope next year there'll be more order.... or move it to a bigger space.