We visited the playground on its last weekend on Gandaria City (thanks to a Twitter quiz for the free tickets). 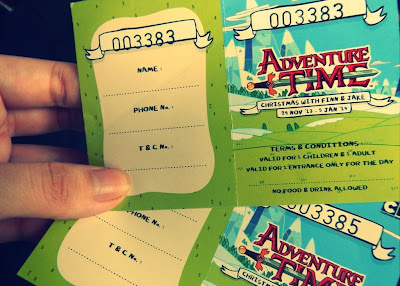 We didn’t get a chance to experience the meet and greet of Finn and Jake, but we did try  the playground. It’s not as big as we had expected and there are only three items on the playground: the pink-colored princess bridge, the ball-throwing game and the slide area. I thought my son was too old for that.

He was excited, but he skipped the pink-colored bridge and go straight to the ball-throwing booth. “Look Mom, I can throw three times in a row…” *Throw* *miss* “Oops.” He laughs. He tries and tries until he got all three down. He moves to the slide and tries the “flying fox”. The next thing I know, we’ve been there for an hour. It’s not the kind of playground that you can leave your kid for hours. There are places for adults to sit in the area. But it’s a nice break for the kids for an hour or two…. And you don’t have to know anything about Finn and Jake to play.

Make the most of your visit: For this kind of mall playground, since you have to pay to enter, go as early as possible to make sure your kids don’t have to fight the crowd just to throw a ball, especially if you come on weekends.